It is well accepted that parents are the leading influence on their child’s decisions to drink – or not to drink – alcohol. As the new school year kicks off, findings from the 2015 National Survey on Drug Use and Health report remind parents to keep up the good work and continue talking about the dangers and consequences of underage drinking. Anti-underage drinking efforts are working and the impact has resulted in record lows according to the latest federal government data.

Across all measures – past month, binge drinking and heavy alcohol consumption – the proportion of 12- to 20-year olds reporting consuming alcohol reached the lowest levels since the study began.

For the past 25 years, we have been working to bring individuals, families and communities together to guide a lifetime of conversation around alcohol responsibility. We believe that parents should feel comfortable talking with their children as young as six years old about the dangers of underage drinking. As students transition into middle school, parents should feel confident explaining the impact of alcohol on their developing body and brain. And as kids become exposed to more freedom as they head off to high school and college, parents should remain more involved than ever by making their values about alcohol known. Even while kids are at college, parents should maintain their involvement and continue to support their kids from afar. We are proud of the parents who continue to help drive these underage drinking numbers down and are committed to keeping our nation’s youth safe and alcohol-free. And for parents who are just getting started, we’ve got resources to help you start a conversation. 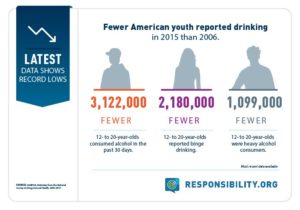