The Fight Against Underage Drinking | Stats on Teen Alcohol Use

Though progress is being made, underage drinking remains a persistent problem. According to the 2020 National Survey on Drug Use and Health (NSDUH) report, about 6.03 million Americans between the ages of 12 and 20 report current alcohol consumption; this represents 16% of this age group for whom alcohol consumption is illegal. Among 12-20 year olds, reported rates of past month consumption, binge drinking, and heavy alcohol consumption have declined steadily from 2011 to 2020, reaching historical low levels in 2020.

According to the 2020 Monitoring the Future (MTF) survey, historical gradual declines on all prevalence measures have leveled off among the nations’ 8th, 10th, and 12th graders. For the three grades combined (8th, 10th, and 12th) the proportion of students reporting lifetime, annual, past month alcohol consumption, and binge drinking (44 percent, 38 percent, 21 percent, and 10 percent respectively) increased in 2020 but noted substantial progress over the longer term remain.

For 30 years the Foundation for Advancing Alcohol Responsibility has been leading the fight to eliminate drunk driving and underage drinking. While rates have declined, alcohol consumption among youth under the legal drinking age remains a concern.

The rate of current alcohol consumption increases with increasing age according to the 2019 National Survey on Drug Use and Health from nearly 2% among 12-13 year olds to nearly 19% at ages 16-17, and almost 36% among 18-20 year olds. Fewer American teens are consuming alcohol underage than ever before, however, longer-term declines appear to be leveling off. Past 30-day consumption increased slightly among students in all three grade levels in 2020. However, long term declines in past month consumption have declined – down 18 percent since 2011 and 47 percent since its peak in 1991. Risky drinking, or binge drinking, increased more than one percent in 2020 among teens but has declined 26 percent proportionally from 2011 to 2020 and 54 percent from a record high in 1997. The majority of American teens do not drink alcohol, clear indications of success in delaying the onset of underage drinking. Forty-four percent of teens report drinking alcohol in their lifetime down 45 percent from a record high of 80 percent in 1991.

While the majority of American teens do not drink alcohol, the longer-term declines noted over the past few decades have leveled off according to the 2020 Monitoring the Future Survey (MTF).In 2020 there were no further significant declines observed in any of the three grades included in the study in the prevalence of lifetime, annual, past 30-day, or daily use, or in binge drinking (defined as having five or more drinks in a row in the last two weeks). Year over year prevalence rates increased slightly from 2019 to 2020 among students in 8th, 10th, and 12th grades, but all rates remain significantly lower than peak years recorded in the early to mid-1990s when tracking of this data began. Past month consumption among 8th graders remains steady at 8%, having decreased 44% over the past 10 years. Past 30-day alcohol consumption among high school seniors falls to its lowest level. Declining slightly in 2019, less than one in three 12th graders are current drinkers, down 29% from 2010.

Three out of four 8th graders (75 percent) report they have never consumed alcohol, down 65% proportionally from 70% in 1991 to 25% in 2019. Lifetime consumption of alcohol among tenth graders and twelfth graders declined proportionally 49% and 36%, respectively, since 1991. By time a student reaches their senior year in high school only 40% have never consumed alcohol. Lifetime alcohol consumption among 12th graders has decreased 34% proportionally since 1991.

During this same period, annual consumption rates continued to trend downward reaching a new record low among tenth graders and high school seniors, declining 64% proportionally among 8th graders, 48% among 10th graders, and 33% among 12th graders.  About one in five eighth grade students (19%), 38% of tenth graders, and 52% of twelfth graders report they consumed alcohol in the past year.

From 2018 to 2019 the past 30-day prevalence rate remained relatively unchanged among students in grades 8, 10 and 12; however, the rate of current consumption among 10th and 12th graders reached record low levels.

In 2019, after years of steady decline, the rate of binge drinking (defined as having five or more drinks in a row in the past two weeks) appears to be leveling off although it remains at or near the lowest recorded levels among students in 8th, 10th, and 12th grade. Since 1991 the prevalence of binge drinking has  been reduced by more than 50 percent among 8th, 10th, and 12th graders - down 65 percent, 60 percent, and 52 percent, respectively. One in seven 12th graders (14%) report consuming five or more drinks in a row, a 37% decrease from 23% in 2010. Nearly three-quarter of high school seniors disapprove of binge drinking. National Survey on Drug Use and Health

According to the 2019 National Survey on Drug Use and Health (NSDUH), about 7.05 million Americans between the ages of 12 and 20 report current alcohol consumption; this represents less than 20% of this age group for whom alcohol consumption is illegal.

Over the past decade, the National Survey on Drug Use and Health surveys have shown a decline in the prevalence rates of current, binge, and heavy alcohol consumption among 12 to 20 year olds:

According to the 2020 Monitoring the Future Study,  alcohol consumption among college students has been level in recent years for the most part. In 2020, the study noted significant declines in the prevalence rates of 30-day use, 30-day been drunk, and binge drinking (having 5 or more drinks in a row in the past two weeks) between 2019 and 2020 (56%, 28%, and 24%, respectively).

Overall, the prevalence of college drinking over the past 30 years, measured as lifetime, annual, and past 30-day consumption rates have all declined. Since 1991, lifetime consumption among college students has declined 15% proportionately, while annual consumption and monthly consumption are down 13% and 25%, respectively.

The Monitoring the Future Survey revealed a continuation of the gradual long-term decline in alcohol consumption among college students. From 2019 to 2020 consumption rates among college students decreased at all measured levels, however, statistically significant decreases were noted for past 30-day consumption, been drunk in the past 30 days, and binge drinking. (Source: University of Michigan, Monitoring the Future, 1975-2020: Volume II, College Students and Adults Ages 19-50, 7/2021)

With respect to the pandemic, it is possible that the significant declines from 2019 to 2020 were due to the pandemic in terms of reduced social time with friends or that the pandemic served as an accelerant to a decline that was already starting to occur. Both 30-day alcohol use and 30-day been drunk decreased significantly between 2019 and 2020 for college students, dropping 6.4 and 7.2 percentage points, respectively, while the previous five-year trends for both of these measures were stable. Similarly, binge drinking which was on the decline, decreased a significant 7.8% to a record low of 24%. Trends in college drinking show continuing declines at all prevalence rates over the past decade. College drinking decreased significantly from 2019 to 2020. Less than 1 in 3 college students report getting drunk in the past month. The lowest recorded level since 1991. College binge drinking dropped to a historic low level in 2020, declining 33 percent over the past decade. Three out of four college students report they do not binge drink.

The Monitoring the Future Study (2015-2020 combined data) revealed high-intensity drinking has continued to decline among college students. During the two weeks prior to the survey one in nine college students reported they have consumed 10 or more drinks in a row at least once, including two percent who reported consuming 15 or more drinks in a row. Declines in extreme binge drinking (or high-intensity drinking) were noted from 14% in 2005-2009, to 13% in 2010-2014 and 11% in 2015-2020; similar declines were noted among college students reporting consuming 15 or more drinks with a statistically significant decline from 5.1% in 2005-2009, to 4.5% in 2010-2014 to 2.1% in 2015-2020. These noted declines in the prevalence of extreme binge drinking are consistent with declines in binge drinking rates (at the 5+ drinks level) for college students. (Source: University of Michigan, Monitoring the Future, 1975-2020: Volume II, College Students and Adults Ages 19-50, 7/2021)

According to the 2019 National Survey on Drug Use and Health (NSDUH) nearly 6.1 million 12-20 year old girls reported consuming alcohol in the past year.

The 2020 Monitoring the Future Study reports among college students in 2020, 30-day alcohol use was slightly higher among women than their male peers (57% and 53%, respectively), however, the prevalence of having consumed five or more drinks in a row during the previous two weeks was noticeably higher among college men (32%) than college women (20%). Extreme levels of binge drinking rates indicate a significantly larger variance by gender for the combined years of 2015-2020 with male college students three times more likely to engage in these extreme levels of drinking:

Where Youth Get Their Alcohol

According to the 2019 National Survey on Drug Use and Health (NSDUH) nearly half of current underage drinkers ages 12 to 20, who consumed alcohol in the past month, report the last time they drank alcohol it was either in someone else's house (47%) or their own home (41%). Additionally, 74% of these underage drinkers said they were drinking with more than one other person the last time they drank.

Family and friends continue to be a leading source of alcohol for today’s youth.  Among current underage drinkers who did not pay for the alcohol they consumed the last time they drank (68%) the most frequently cited source of alcohol was an unrelated person aged 21 or older (29%).  Fifty-six percent of current underage drinkers reported family and friends as their source for the alcohol they consumed - parents/guardians/other adult family member (28%), another underage person (16%), took from home (9%), took from someone else’s home (3%).

Despite being identified by youth as one of their primary sources of alcohol, hands down, parents are the most influential person or thing in a child’s decision not to drink at all or not to drink on occasion. 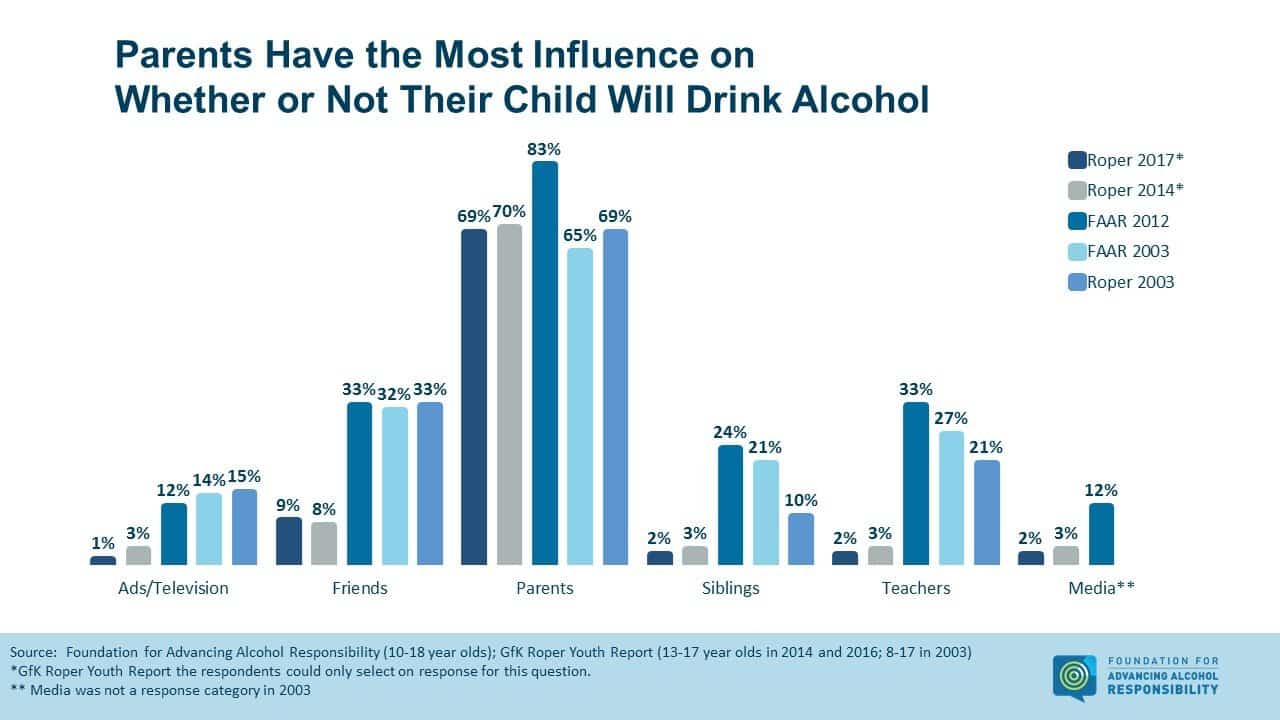 Additional research from the Centers for Disease Control’s 2019 Youth Risk Behavior Survey reported that 41% of students who reported past-month consumption said that they usually obtained the alcohol they drank by someone giving it to them; the prevalence of having someone give them alcohol was higher among females (45%) than males (35%).

Regardless of the source of alcohol, youth report access to alcohol is easy. According to the 2019 Monitoring the Future survey 83% of 12th graders, 67% of 10th graders, and 49% of 8th graders say it be "fairly easy" or "very easy" for them to get alcohol.  On a positive note, despite reported ease of obtaining alcohol disapproval of binge drinking continues to remain high among all three grade levels (8th, 83%; 10th, 81%; 12th, 73%).