At the end of each year, the Foundation for Advancing Alcohol Responsibility gives awards to members of Congress, Attorneys General and state legislators to recognize their work to stop drunk driving and prevent underage drinking. As 2015 comes to a close, we want to take a moment to recognize the elected officials we honored for their dedication and leadership on these issues this year.

Throughout the year, the members of Congress we honored promoted responsibility through communications efforts on Capitol Hill and in their districts and states with their constituents and followers on social media. They championed resolutions that were adopted in both the House and Senate and made our annual Take Our Daughters and Sons to Work Day event on Capitol Hill possible. They also pushed for language in the Surface Transportation Reauthorization and Reform Act encouraging states to screen and assess drunk drivers for mental health and substance abuse issues in order to prevent recidivism. The 2015 recipients of our member of Congress awards are: 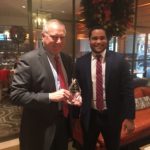 Also at the state level, state legislators were very involved in preventing drunk driving and underage drinking. Ignition interlock laws were introduced or strengthened, Medical Amnesty (sometimes called Good Samaritan) bills were passed, penalties were enhanced for repeat DUI offenders and for people driving drunk with children in their cars, and the importance of assessment for drunk drivers was recognized. In other states, legislators fought off efforts to weaken DUI laws. We honor these legislators for their efforts in 2015:

We are proud to lead the fight against underage drinking and drunk driving with the help of these members of Congress, Attorneys General and State Legislators. We thank them once again for all their efforts, and would like to remind everyone to #HolidayResponsibly to help continue the great work of these leaders.